Hi everyone!!! I had no idea it has been 3 weeks since I have been here! I took a LONNNGGG break. There are of course MANY reasons while i have been away, but the main was I needed a break.

With everything that has happened so far this year, I wanted to unplug. There was also SO many things I wanted to do at home, with Andrew, and with myself, that the blog fell to the wayside.

My dad came over that morning and we released him outside. He was much cuter outside!

I also have gone back to work full time. It has been a rough transition, since I am still getting my strength back. But on a positive note, I am SOOOOOO happy to be back. I have missed all my coworkers and the babies so much. ❤ NICU 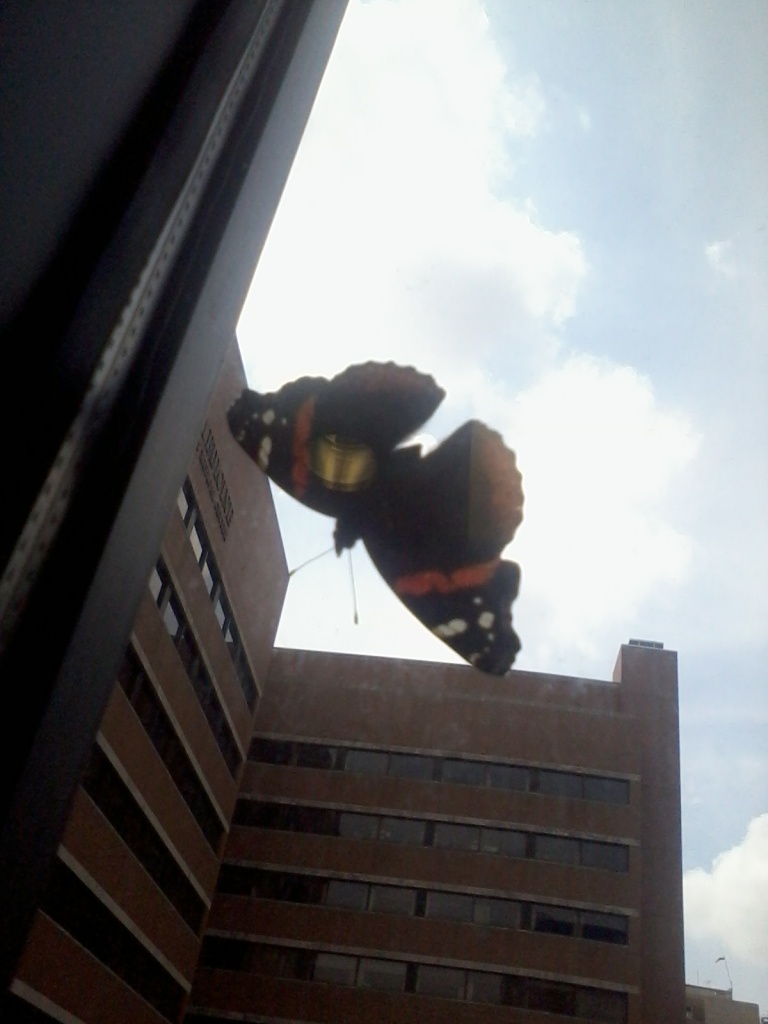 I also had this amazing “friend” visit at work

On a not so happy note, I was in a car accident last week.

Luckily, everyone was ok . But the person who hit me who’s fault it was, does not have insurance, so I have to pay for some of it 😦

I also had another doctors visit while I was away. I did need to be put under, but no incisions and I was able to go home that day.

It all went great and I am just now being followed 🙂

Andrew and I are finally back at the pool~

this is him going down the FAST slide! There is just something about being out in the sun that makes me happy

I know there has been so much going on, I am sure I forgot some things on here, but I promise I will be around more now!

What is something big (or not so big) that is going on for you the past few weeks?

Andrew and I went on amazing bike ride this weekend. Know why it was so awesome? It was sunny, warm, and I was OUT of the house!

I have not been out for a bike ride since before the surgery. I have missed being out of the house and getting exercise at the same time.

We rode around the neighborhood for a few miles, then rode to have lunch with my cousin. We sat on the patio and had a nice lunch. All in all we rode a little over 5 miles. Afterwards, I was pretty tired, but it felt so great to get outside and moving!

It was a perfect Saturday 🙂

What is your favorite outdoor activity?

-for me, it is swimming (or just the beach haha)

I have to say THANK YOU so much to everyone’s response about my not so expected CT results. I will say I am feeling better today, mostly because I stayed pretty busy (otherwise I would start tearing up)

SOOO the day started by having breakfast with Andrew, and taking him to school. Then to Sam’s to stock the frig, especially with lots of eggs. 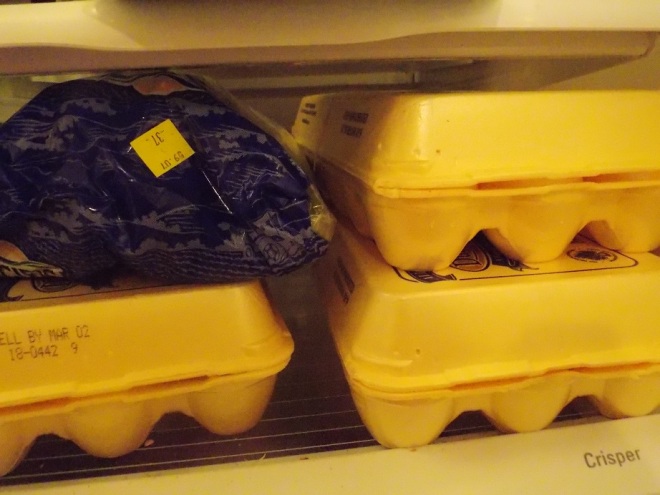 (I think I could eat eggs for every meal)

Next up, was the muscle works class at the gym. It was awesome.

Then I went on a cleaning spree.

I got the bathrooms, all the wood floors, laundry, dishes, and anything I could get my hands on cleaned up. I even washed the shower curtain. haha

I had stew in the crockpot

I also stopped by the grocery store for some almond “yogurt”.

I even had 20 minutes to lay down before I picked up Andrew from school. That’s when I got a bit teary, and headed to attack more of the house haha.

Lots done today, which I am really happy about, and helped me keep my mind busy.

What do you do to stay busy?

Andrew and I had a pretty quiet but still fun Valentine’s Day and I hope you did too!

In the past, I have always REALLY disliked this day because I was single (now I dislike it because of all the pressure!) So instead, this year, I just tried to have a nice day with Andrew. It was pretty awesome

Earlier in the week, we printed minecraft valentine’s for his teacher and friends 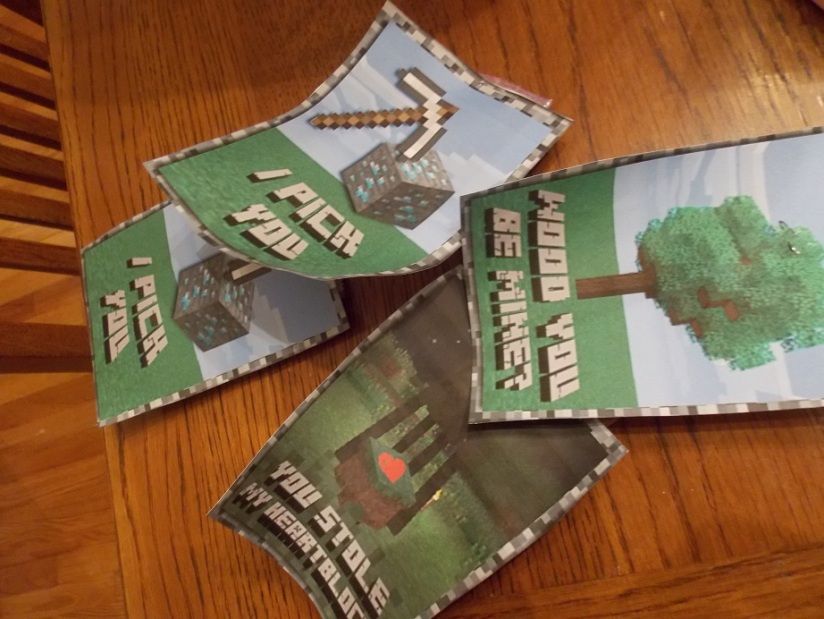 For dinner, Andrew and I headed to my parents. I loaded my plate with lots of salad and meat!

I also got some snuggle time with my nephew Seamus 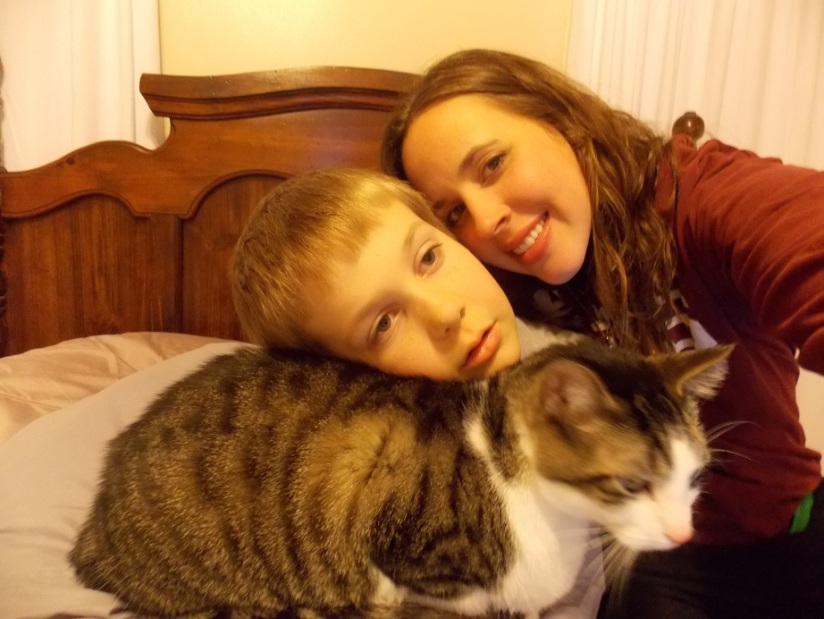 I also gave Andrew a chocolate rose and card

The inside of the card was the best part 😉

What did you do for Valentine’s day?

The past few weeks have been a roller coaster of ups and downs, but I always love looking back at my camera and phone to find the random pictures that didn’t quite make the blog.

I think someone MAYYY have found my new camera haha 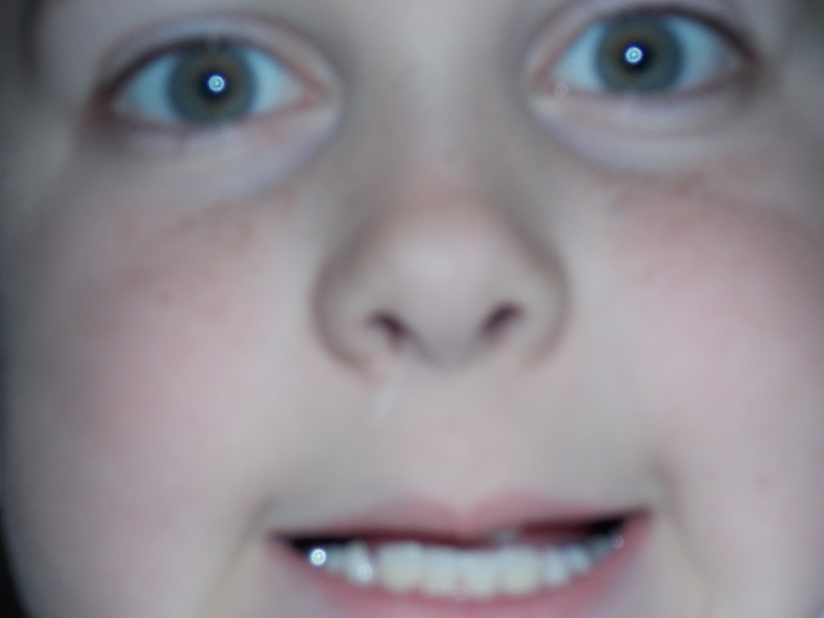 Andrew and Mr Bubbles are buddies 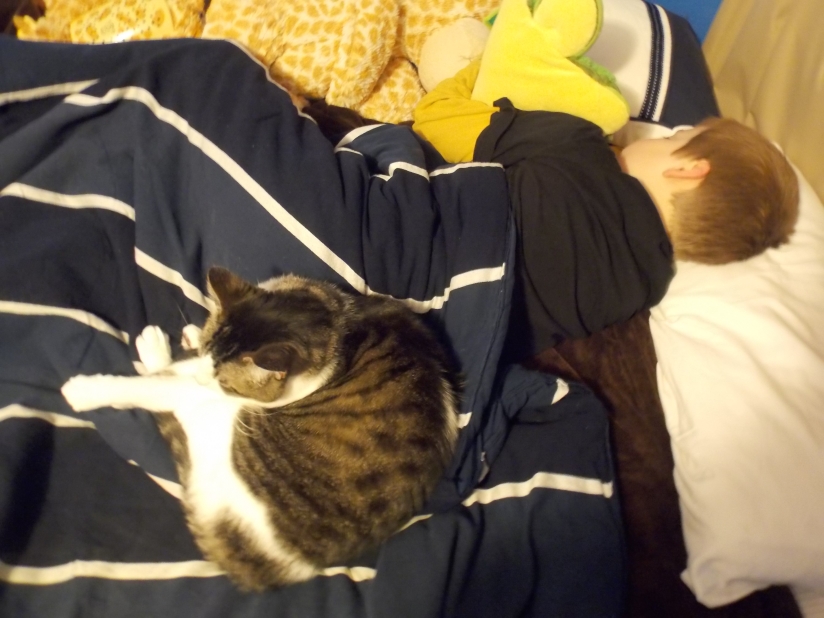 I FINALLY got a new computer. Trying to figure out windows 8 and all these fancy features haha 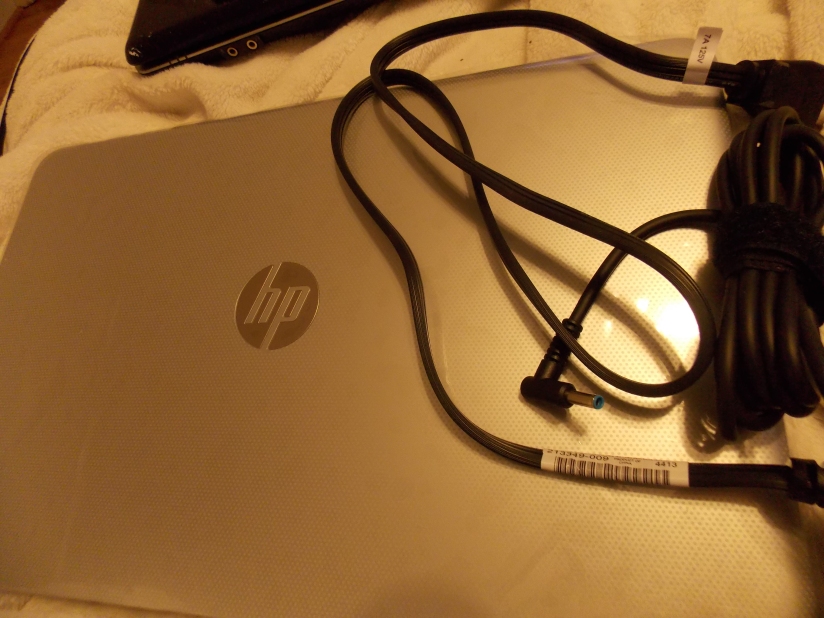 Crazy icicle handing off the gutter of the garage (I still wish it was spring already!)

Anything random in your life?

What do you take the most pictures of?

I hope everyone had a great weekend! Mine went by SUPER quick with work, a date, and no sleep. It was a bit crazy. This post is all over the place, but it has some good stuff!

First, work has been a little sad lately. A baby I was close to, past away last week. So going back to work and having the room empty, was extremely difficult. Today, I went to the funeral, and stocked up on the Kleenex. Luckily, there were several nurses there and we were there for each other.

Next up, my date. I haven’t been talking lately about the dating scene. Because basically, it was non-existent haha. Which was actually ok, but I was focusing on me, Andrew, and my health. So when a groupon came about for a month at match.com, and I joined. I spoke with a few guys, but nothing really sparked. Then two weeks ago, I had a friend text me to see how the dating scene was going , and that she had a friend she wanted to set us up. Well, apparently he was one of the guys I talked to, he seemed nice, it just didn’t go anywhere. Well a few dates later, and things seem to be going well.

ANYWHO, that was a long explanation to the pizza. So because I worked, we stayed in on Saturday for pizza and a movie. And the girls at work KNOW that I don’t eat pizza, but my date does not. He knows I have belly issues, but I didn’t want to be the girl that only eats salad. So we got pizza, wings, and salad. I did eat pizza. Then I also only got 5 hours of sleep. Which resulted in BAD HORRIBLE eating on Super Bowl Sunday. I haven’t eaten that bad in about 6 months.

I am trying not to beat myself up, so today I headed to the gym for more rowing and weights! And cleaning up the food again. I guess one bad day in 6 months is still a million meals that were a success!

And now it is 9pm and I am heading to bed! It is time to get back to a sleep schedule.

Just a cute picture of Andrew.

Giving him lots of extra hugs and kisses today

How was your weekend?

Do you have a certain time to get to bed?

Andrew and I had a great Mexican dinner a few nights ago, and I have to say, the avocado made the meal!

I just had ground beef, lettuce, tomato, and avocado. That’s it! 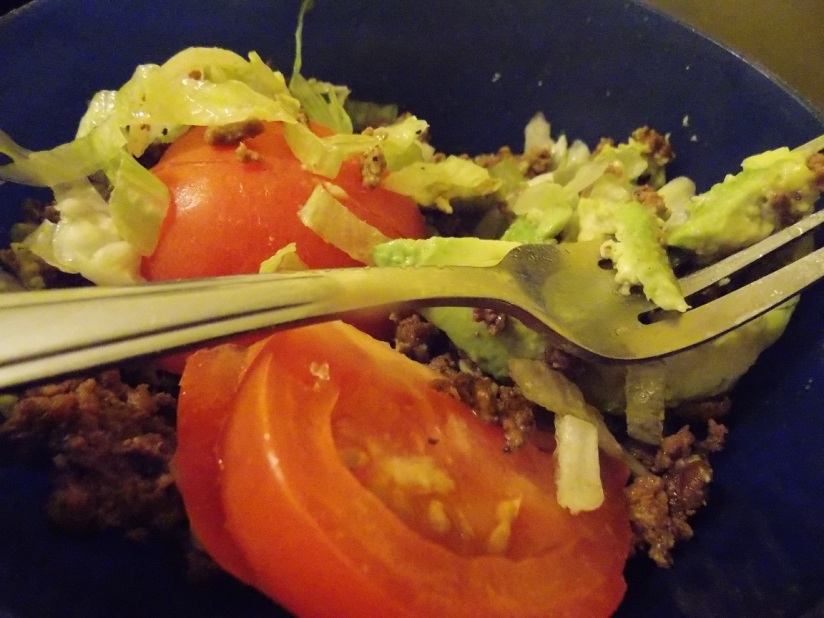 Of course we also had a bunch of photos…… 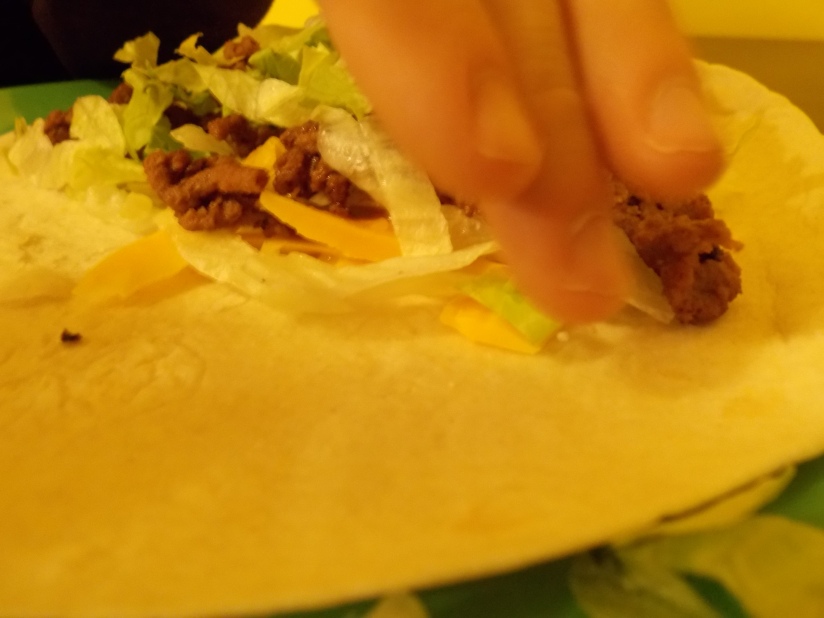 What would you put in your taco salad?