My final guest post is from my good friend Tiffany. We actually met on sparkpeople.com. I had a blog, we began following eachother, she inspired me, EACH and EVERYDAY. Basically she is awesome. I also get a lot of information about paleo, eating health, and just life in general. She is also one of my biggest cheerleaders!

First, I can’t believe that Kristen asked me to guest blog for her…I don’t have a blog and I don’t follow more than two…Kristen’s and Angela’s Chicken Scoop!   What could I possibly have to say?   Well, Kristen thought maybe I could share about my journey since we first “met” on SparkPeople.  Somehow, I “met” Kristen and Angela on SP and we became good online friends.  Angela doesn’t live too far from me, so we actually ran a few races together and then last year we decided to road trip to St. Louis and meet Kristen in person!  It was the most amazing few days and my all-time favorite Marathon to date

So, my SparkPeople journey began on January 1, 2010.  I finally hit a point where I was so frustrated with my weight that when someone mentioned that website, I jumped on it and never looked back.  I was a regular on there for months.  I logged all of my food, I logged all of me exercise and met some amazing inspiring women.  Years before, I had given up eating bread and pasta (thank you South Beach) but I really wasn’t dialed into the exercise part.   As a mom of four girls, at that time aged 9, 7, 6 and 4, I was busy!  I was a stay at home mom with no real routine.  I had previously run, did a few half marathons, was a HS and college athlete…what was my problem?  I started walking every day.  Our neighborhood has a “loop” that we discovered is 4 miles.  I walked it every day.  Then as I got better at walking it, I’d try to finish it in less time.  By April, I was able to jog a bit of it. Then I added in some Jillian Michaels.  I couldn’t even get though the first 20 minutes of her 60 minute workout!  But I kept trying.  Every day, I’d try to make it to the next section.  By the end of the week, I could consistently make it through another section!   I was making progress and then that became the motivation.  In August, I went to an event and there were women who didn’t recognize me.

My self confidence started to come for the first time in a long time…I battled an eating disorder in college – I think they refer to it now as exercise bulimia.  I also have a mild case (not formally diagnosed) of dysmorphia.  I don’t see what others see when I look in the mirror.  I have so see a photo of myself to see what I look like more accurately.  So, no matter what my weight is (225 or 135) I see myself as a chunky size 14.  No matter what the tag says…it can be 18 or 6, I still see the same thing in the mirror.  But on the inside, when I was exercising and eating well, I felt great.  I felt like a million bucks!

Fast forward to February 2011.  I was having some serious foot pain and I’d recently recovered from a hip stress fracture and I went to see a new chiropractor.  As he and I were talking about diet and exercise, he mentioned something called the Paleo Diet.  Now he was using the word diet as the kinds of foods you eat, not the calorie restricting process that we often think of when we hear that word…  I was intrigued so I came home and Googled it.  I started reading websites, trying out a few recipes, it wasn’t too different from what I was already eating, except my religious consumption of oats.  And I wasn’t about to give them up!!!

Well, I eventually did give up oats, and all other grains along with legumes and eventually transitioned my family into the Paleo way of eating….They “cheat” when out and I often wish that I’d know about it when they were young before developing a love for pizza and chicken nuggets.  I try to mix it up for them and sometimes packing lunch can be a challenge (none of them ever like the same thing!)  We use a few websites frequently and have several cookbooks which they love to flip through looking for new ideas.  A few of the websites I love are, Nom Nom Paleo, Civilized Caveman Cooking, Everyday Paleo, Primal Palate, Paleo Parents, Robb Wolf, Mark’s Daily Apple and my friend Liz at CaveGirlEats.  Even if you don’t eat Paleo, some of their recipes are amazing.  Non-Paleo friends often ask for the recipe when I bring dishes to events and parties.

If I had to wrap up my journey in a quick little nutshell, it would be to say that I found the most of my success in consistent exercise and making better food choices by sticking to things without labels, eating whole, real food…I usually only shop the outside of the supermarket.  And by not having the “junk” in the house for the kids makes it easier on all of us…we all have to eat real food when we are hungry.  There isn’t really another option since I don’t even buy it!  Makes the temptation less for me, too, so it’s a win/win in my eyes!

While I continued to run half marathons here and there and developed a passionate love for mudruns, my biggest accomplishment came last fall when I ran the St. Louis full marathon in October then 30 days later ran the Philadelphia full marathon.  I know that I never would have been able to do that if it hadn’t been for my commitment to health and eating Paleo.  I’ll leave you with a picture from 2005 when I was at my heaviest…and remember anything is possible when you commit, get up when you fall, and keep going!

Thanks Kristen for letting me share!  Hope you are enjoying some well deserved time away.  Can’t wait to hear how it all went!

Hello from the beach! Here is one of my first guest posts, and it comes from Nikki at lifeafterswimming. Not only is Nikki teaching, coaching, and planning a wedding, she also has time to cook! Luckily she is sharing a great recipe with us! And only three ingredients, you can’t beat that!

Hey everyone! Thanks to Kristen, I’m here with a guest post for ya! I hope she’s having a great time, and I hope she’s taking a nice break from technology, too! A little break is good for the soul!

I’m here today to introduce you to my favorite cookie recipe as of late.  It’s probably the simplest recipe in the world, but it makes for a filling, low calorie treat!  And another plus is that it can be easily adapted to include a multitude of yummy tastes!  I’ve already posted it on my blog, but I wanted to share it with the rest of Kristen’s readers because this recipe is honestly the simplest recipe that is also satisfying!

Three ingredients is all it takes for a healthy, filling, delicious dessert.  A bonus: each cookie is roughly 50 calories! 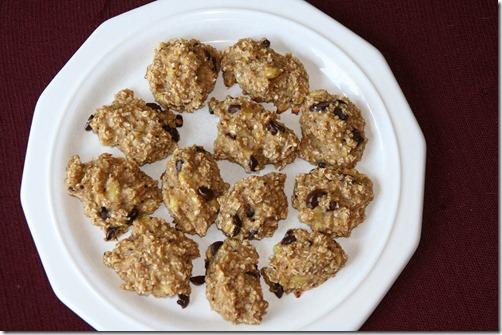 Preheat oven to 350.  Mix all ingredients together well, spoon onto a greased baking sheet, and bake for 15 minutes.  The end.  Easy as pie (or cookies in this case…). I got 12 nice-sized cookies out of it.

The nice thing is that these can be modified simply.  You can switch out the chocolate chips for raisins, dried fruit, nuts, etc.  Or you can add a little bit of nut butter for a smoother taste!

Seriously, I encourage you to try these! They don’t really taste like a health cookies, and they are totally perfect for a little sweet tooth craving!

Thanks, again, to Kristen! Hope you enjoy the recipe! 🙂